Slot machines have been in existence for over a century. Their history is full of surprises. This article will present it to you. Everything began in the United States in the nineteenth century.

In the 1890s, an American of German descent, Charles August Fey, gets a passion for automated roulettes which flourish in San Francisco, the city he lives in. Already the owner of a company which makes phones, electrical equipment and parts, he decides to design a machine to gamble on. In 1898-1899, the fruit of his labour is ripe: it is the first mechanical slot machine in history, called Liberty Bell. It is revolutionary compared to what exists at the time. It is met with an incredible success, such that Fey decides to give part of his business to his associate so that he can create a new company, specialised in the making of slot machines. 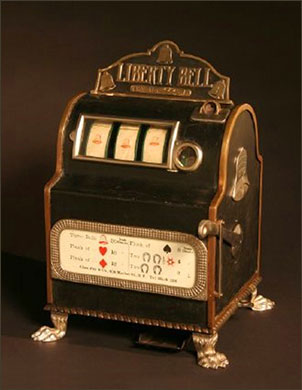 Such a popular success attracts logically envy. In 1905, a Liberty Bell is stolen. It allows a new make to appear on the market, having dissected the machine to see how it worked. From then on, competitors multiply, like Walting and Caille. Fey's major mistake is to have decided to keep the exclusivity instead of selling his patent.

This fast spread of slot machines scares authorities which draft a law banning their use. It is the time of the prohibition. This legal evolution could have hindered this blooming industry without Mills' intelligence. He adapts each slot machine as a dispenser of sweets. The player buys sweets with coins and, according to the combinations, will win tokens or not. The symbols on the one-armed bandits are changed to fruits for the occasion: plums, oranges, lemons, strawberries and mint. Fruity slots nowadays pay tribute to these machines.

In 1931, the legislative assembly of Nevada legalises gambling. When Bugsy Siegel opens the first casino in Las Vegas, the Flamingo Hilton, he installs a large number of slot machines. His strategy is simple: he hopes that these cheap and easily-accessible machines will occupy the wives of table-gamblers. He orders the creation of an innovative slot machine. It is the start of a flourishing part of the casino industry, which starts generating more money than any other game.

In 1964, Bally develops the first wholly electro-mechanical slot machine: Money Honey. From then on, one-armed bandits abandon all traces of machanical elements and gain in reliability. New functionalities appear like motorised money jumpers which siplify payments and electrical ring-tones which allow casino-workers to know when someone hits a jackpot. A large number of machines can therefore be supervised by reduced staff. 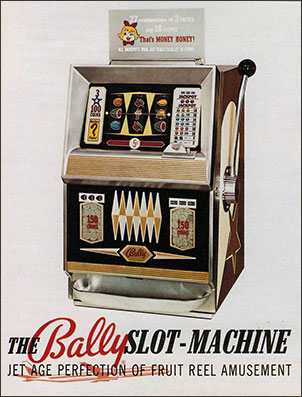 Appearance of the Random Number Generator

During these years, slot machines evolve quickly with the appearance of lighter materials and new functionalities. In the 70s, slot machines start using micro-chips. In 1980, a new revolution hits the market: the invention of a random number generator which lowers the cost of slot machines and guarantees fair games with no cheating or mishandling possibilities. Also, the first video slot machines appear. These one-armed bandits do not use reels anymore. Symbols appear on digital screen. At the start, players are reticent to these evolutions. Companies then adapt the sounds of the older machines to give the same sensation to players. This trick allows these evolutions to become mainstream and widely popular.

With the appearance of online casinos in the mid-90s, slot machines have been adapted to the internet. You can now find digital versions of every type of one-armed bandit: multi-line, mechanical, video, with or without bonus games, free spins, scatter, joker or wild symbols!